A word about graphic images

In case you didn't guess yet: Yes, I do feel very strongly about freedom of expression.

Though I know, words are cheap, and for many people telling the same (at least as long as they think it'll benefit their public image), actually it's just lip service.

Well, not for me. And in contrary to some other bigmouth cowards, I did time in an increased security jail to prove it. 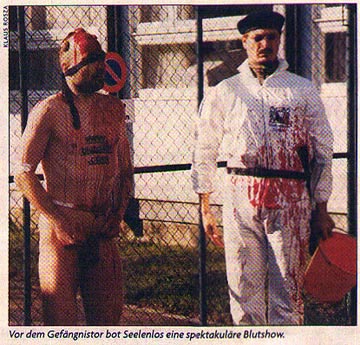 "Bloodbath"-Performance ...
... in front of Urdorf privatised jail, as a protest
against unconstitutional prison regime, 2000
© Klaus Rozsa / photoscene.ch / Metro (Switzerland)
Just for having played a copper in a small self-produced video-film that the local cops did't find as funny as others, plus after being arrested still refusing to back down and play lickspittle.

(Ok, about 45% of the jokes in it were on them, and obviously no way to expect authorities to show any sense of humour. By the way, of the local squatters (like myself at the time), on which were another 45%, many didn't really prove to be more open minded either.)

Still was a bit surprised to hear the judge ordering all existing copies "to be burned" etc. etc. -- though yes, actually that's another story already told somewhere else. And just by the way, by far not the only case I rather suffered the consequences than obliging to some wannabe-nazis trying to tell me what to say or write.)

On the other hand, in general I also want everybody to have his or her own choice concerning whether to watch gross 'n' gory details or not.

(Notably with the exception of e.g. police violence and the likes, imo -- again with a few exceptions -- everybody should have to witness that with their own eyes in order to get a proper perspective on that matter.)

In the case of bodyfascist.com, I'd like people who don't feel having the stomach to look at surgery pix to be still able to read the blog without e.g. losing their breakfast.

Though I also feel those wanting to see it all should have their choice, too.

So what I'm gonna do here is this:

Every time I feel I should show consideration for readers with a more sensible stomach, I'll just put in a link saying "Graphic Image(s) -- click to view", or give you a fair "WARNING!" bevor you click an otherwise possibly sensible link. So everybody feeling like it can do so at their discretion, while the others might just move on.

(And yeah, just by the way No 2: Though this blog might be a bit more low profile concerning the risk of people in power getting a wee bit overexcited than some other stuff -- well, you never know. E.g. google.com, that recently bought blogger.com, isn't precisely known for being too tough when it comes to refusing to titillate censors anywhere. So just in case, if you'd like to bookmark this blog, do bookmark bodyfascist.com and NOT the blogspot-URL, since if necessary or else convenient I'll just redirect the former.)
Posted by Matt at 12:19 am