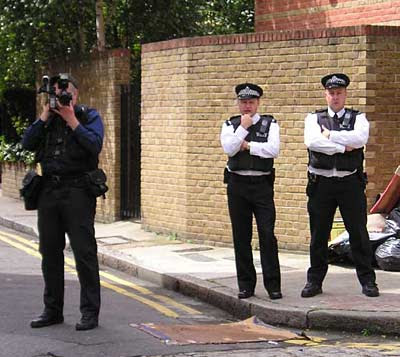 Boy, do they look well trained, don't they?

Now they're even allowed in other places, too! Travellin around the country wherever duty calls! To boldly go where no other copper has gone before! 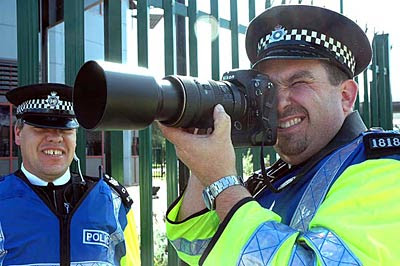 And yessir, I do like my officers friendly ... or not at all.

http://fitwatch.blogspot.com
Posted by Matt at 5:28 pm No comments: 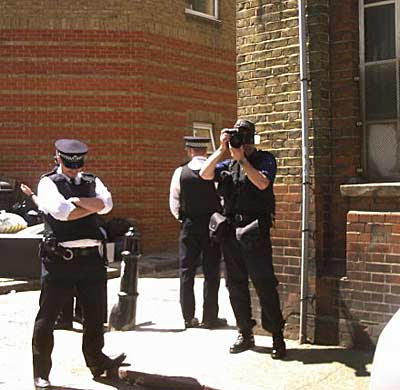 Last year I wrote bout how I witnessed the Met's glorious 'Backwards Intelligence Team' (as a.o. the clowns call it) photographing everyone entering or leaving thee rampART in Whitechapel in order to put them on file for terrorist activities (i.e. attending a meeting of a political campaign -- btw. whether they actually attended or not).

Well, guess what? Yesterday, the FIT guys were just back for the umpteenth time, at the very same corner -- just for having their own picture taken, too.

An me bucko, if you'd hide your face and play hard to get like demse brave ones, they'd even take you for a free ride probly ... or something ...

edit: just when you thought it was over ...
(hat tip to johnny void)

... again again (and these are very funny lookin fellers indeed!)

Ah, the irony. Not sooo long ago, cause of a complaint about 'subversive smere campaigns, especially against the police' and other 'illegal content', no less than The Bavarian County Criminal Department, Interpol Wiesbaden, The Swiss Federal Police Department, The Zurich County Police (Special Division 2), The Zurich District Attorney's Office, they all wanted virtually all of our homepages taken down (plus yours truly held responsible for even more pages he didn't even know about).

However, after a two year legal battle, failed.

Ok, they've been giving us an interesting time, but not once they managed scrapping a single word, link or pic on any of the (rapidly growing) pages, no siree.

Whereas now the 'anti-censorship' dutch Provider xs4all.nl just succeeded no sweat, deleting pages at will and locking us out of our own paid site by changing passwords without notice, not to mention thereafter having the cheek of refusing to give us the new ones. I mean, the company we paid, on our own pages!

Ok, eventually some of our security measures kicked in, and eventually, after announcing them the first entries on the net calling them censors, suddenly was no problem doing what all emails and phonecalls earlier didn't achieve: telling us the passwords straight on the phone at once ('though that's not usual').

Too late, boys. Revenge is petty but sweet. Hope makes at least some small dentures into your hip 'anti censorship' rep from better days.

Ok, I'm well aware, though they might've put a smile on some coppers faces, actually the responsibles-but-not-answerables at xs4all (sold to privatised Dutch telecom KPN rsp. kpnqwest 1998, 2006 buying or original provider demon.nl) probly couldn't care less about the content of the pages they took down.

And yes, they didn't do so on purpose, but by merely being sloppy and arrogant as usual.

But frankly, whatever the intent, effects like the ones in question here still aren't exactly improving my freedom of expression (nor anybody else's, I guess).

And yes, just in case you harbored any doubts, there's still plenty actually intended censorship stuff going on, e.g this incident about a flash-game the vatican didn't find funny. However, at least for the moment, even if God's Local Stromtroopers had succeeded, bet you'd still be able enjoying yourself by playing OPERATION: PEDOPRIEST just in spite? (WARNING: 'Extreme Adult Themes')
Posted by Matt at 5:39 am No comments: