Boy, do I look old this early in the morning ... 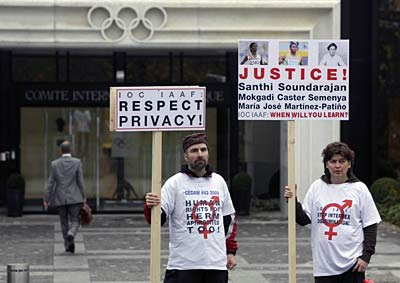 "Justice for Santhi Soundarajan and Caster Semenya!"
(Photo: Reuters)
Ok, so it was a wee bit early when we went after the IOC, even for one of our infamous mini-rallies.

(Btw., here's what it was about in a nutshell, and here's a some essential background.)

Reckon I should work out more often. Not to mention getting a bit of regular sleep every now and then. This is just too much, or even plain unhealthy, and it just never ends like. 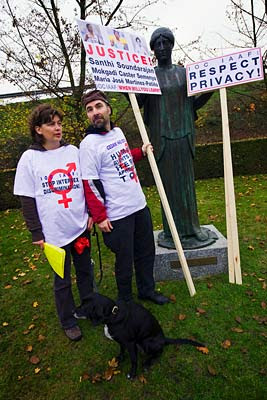 (Photo: FABRICE CAFFRINI/AFP/Getty)
However, still like the above one especially, this AFP-snapper Fabrice Coffrini seemed to dig some humour as well (also I can blame everything on the wide angle like that). 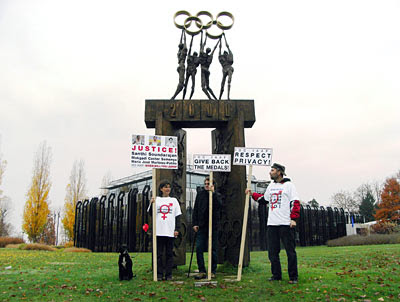 (Photo: Ärger)
And since there were ahem more photojournos than demonstrators, this statue below in front of the entrance of the IOC came quite handy, as we had to leave the placards somewhere in order to deliver our Open Letter. 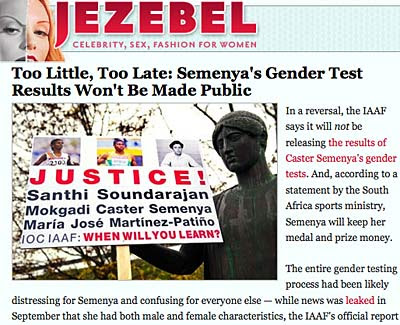 (Photo: FABRICE CAFFRINI/AFP/Getty)
Not to mention the statue looking obviously more glamourous than the two of us ...

Anyways, all things considered, actually went down quite well.

Except maybe for the New York Times reducing my beautiful hermaphrodite girlfriend to a mere 'woman' in their blurb – shame on youse: 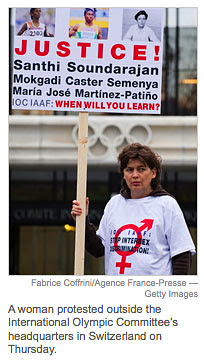 (Speaking of, it's a week later now, but I'm still wrapping up. At least yesterday slept more than 5 hours in a row since I don't remember when – actually 13 hours more or less straight, but today coming from work still just passed out again. Not to mention all of the rest I should really, really have finished yesterday. Also the explanation why I didn't manage posting anything here erm lately.)

And, just in case I didn't mention yet:

Background article: The Hounding of Caster Semenya and the Extermination of Hermaphrodites in the "Developed World"

The rally: "Justice for Santhi Soundarajan and Caster Semenya!"

Another nice article in english, about this year's children's hospital rally: Campaign against corrective surgery