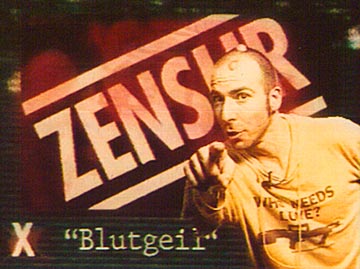 When they were still small and cuddly
Screenshot from danish TV-production, Copenhagen 1994
© TV-STOP
Frankly, at the moment don't know that myself. As I was told by my doctor when they first appeared (and since then told everybody, well, almost everybody), they were supposed to be something called 'atheromes', that's sebum glands not working properly rsp. that got stuck.

But when the surgeon sent in the first one for analysis after removal, turned out it was something very different consisting of hair root cells running amok, though gladly still nothing dangerous. But something so rare that he also had never heard about it before and will have to do some homework himself before being able to actually fill me in. So right now I'm still wondering myself too.

EDIT: Got it. It's a benign tumor stemming from hair root cells. The diagnosis according to the lab report was 'trichilemmal cyst', though in the u.s. 'proliferating pilar tumor (PPT)' seems to be the more common name.