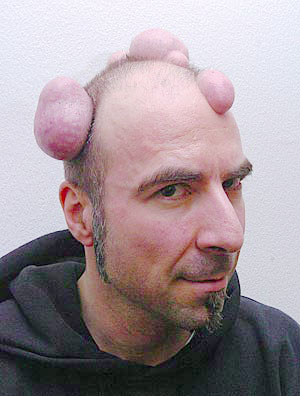 In all their fully grown splendour and glory ...
London, a few days before 1st surgery.
© Guy Smallman 2006
From a strictly medical point of view, there's no actual reason to remove the lumps. I.e. they're no threat to my health, and even less to my life expectancy. I only have to take care to avoid them and the rest of my head getting too cold, especially in winter, since they've very poor circulation. And also trying to keep them from becoming inflamed, rsp. regularly checking on that.

Funny enough, medical trouble encountered only by trying to get rid of them, in connection with the 2nd round of surgery, but never by the lumps themselves. Which -- if I'm lucky -- after 1, 2, 3 more sessions of slitting and grafting eventually will be more or less sorted (but with the rest of the lumps still remaining to be removed somehow).

Ok, in the last years they began growing faster exponentionally, so partly started becoming less practical or sometimes even getting in the way. Frankly also liked the look of them better when they were still small and cuddly.

But besides that, myself I had no further problems with them, in contrary.

That I'm eager to get rid of them now is mostly for social reasons: Cause virtually everybody else seems having a huge problem with them (and then in the end also with me). Obviously having the cheek of getting myself these things grown and then even showing them automatically revoking my right of being treated as a full fledged fellow member of the human race or something.

A long time frankly didn't care too much about all of that (to say the least). Probably not being the overly social type anyway. Not to mention not having a specially high opinion of most people.

Though in recent years got the impression them lumps beginning more and more to define my relations with whomever I meet, as long as I'm not submitting to mandatorily wearing a camo (though that's in many cases only postponing it). Means me anticipating their rejection and treating them accordingly before they even expressed it. Which of course can easily turn into a self-fulfilling prophecy rsp. a vicious circle.

So eventually got to the point where I thought probably wouldn't actually do me really good just stubbornly going on, insisting on this being simply the way God, Nature or whatever created me -- and f**k about the rest and especially everybody who's got a problem with that. The more since I can just have them cut off more or less easily -- or at least that's what the doctors said ...

Ok, there's also special situations, where I can potentially (and actually) still feel hurt personally. Like meeting this special girl again, and she smiles at me, too -- but not anymore when realising what's exactly under my magic cap.

So, after a long and heroic struggle against society's unwritten laws and most of its members' inherent stupidity, eventually decided to give in and finally submit to the social pressure (shame on me). So here I am, eagerly doing whatever necessary in order to humbly conform to the oh-so-beloved average norm visually. And live happily ever after. Yessir!

However, still with a bit of a bad conscience.

Actually never felt more guilty of being a body fascist than when going over to the beautyfarm having cut off the first one. (Even kinda prayed for forgiveness for doing so. Perhaps should have done that a lot more before going for the 2nd round of surgery ...)

So in order to come to better terms with my bad conscience and trying to get the whole thing more clear, eventually roused myself to start this blog.

Not to mention I seem having a flair for such dubious kinda projects 'at the border of the pathological' (as a State's Attorney once put it). Not to mention sharing my thoughts and experiences -- if not straightaway preaching to the ignorant rest of the world how to see the f**king light. Not to mention getting used as a human zoo, being talked about behind my back but not to my face etc.

Or at least that's my admittedly not specially high opinion of most people, based on experience. But hey, you can always prove me wrong ... or can't you?