Farewell to the beauty farm 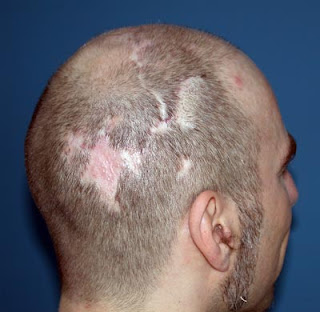 Last appointment. Mop up shots. Surgeon was pleased with the scar development. Me too. Meant it, when I thanked him and the assistant.

Though it's still pretty funny touching the scars and especially grafts myself, somebody else touching them does feel nice. Also with regards to the synaestesia thingie with the one on top, feels like being thouched at other parts, too.

Anyways, am glad having them tumors off. Especially cause they just would've kept growing, I reckon.

Guess if I really strictly want going unnoticed, would be even more difficult covereing everything with a cap now. But what the f**k.

Funny, how actually it's still a bit like with the lumpies, though fairly more moderate. Especially from my point of view, i.e mankinds immediate reactions mostly beyond my ken. Filtered out automatically, no effort needed. Sweet denial.

Sweet irony as well, since I always got the impressions everybody more troubled about them than yours truly, actually mostly giving in to social pressure.

Peace-offering to all humankind, blablabla. Sorry didn't work out as nicely as it should've.

However, ahem, not exactly my fault really. Neither if you're still offended. Official license, now. Not guilty. Sorry.

And yeah, though I could go for more surgery to make the freaky parts smaller, will just leave 'em as they are, thanks.

Surgeon was nice, also asked about the scar on the hand. The b*stard one, still handing out electric jolts, that is.

Himself he'd fared even less lucky. Fallen from from a horse, back broken. Though definitly lucky enough so the spinal chord remained unharmed. Still has to go wear a corset for half a year, since he's got no assurance for sickness daily allowance, as he said.

Copied me the whole folder with all my pix, also some I hadn't had before, so brace for an update at some point.

So, after 11 months in 'n' out, looks like I just left the beauty farm for good. Walking towards the bus stop, hit the air with both fists and turned the phones a bit louder than usual.
Posted by Matt at 6:05 pm