Back to the beautyfarm (Pt. 2)

Once again getting up a bit too early for my taste. Though for a change not to catch some transport, but mainly to get myself prepped for the next round of surgery.
This time not to have another lump cut off, not yet. But in contrary to create 3 new artificial ones by inserting implants under my skin, which then will be inflated slowly in order to grow some surplus skin that hopefully will be sufficient to eventually get rid of the other ones without (too much) skin graft.
And they'll be HUGE, even bigger than my 'natural' ones (though not in height): two rectangular ones of 3.6x1.8" plus a round one with 2.8" diameter. Welcome Mr Hydrocephalus, how are we today? 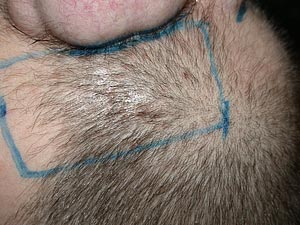 Where the top left 3.6x1.8" expander ...
... will be shoved under the scalp.
© Soulless 2006
So actually before I'll look a bit more like everybody even without a cap, first I'm gonna look even much worse during the coming weeks and months. Not to mention that I'll have to come up with new camo.

So back to this nice'n'posh beautyfarm in this really posh village just outside Zurich. Hope my health assurance will cough up the money pretty soon, cause he insisted that I would pay up for the other lump first, which already was slightly more than the remains on my bank account, and there's other people and stuff I will have to pay as well before the end of the month.

Concerning today's surgery, I'm confident about the outcome, but getting there was literally quite a bloody mess. 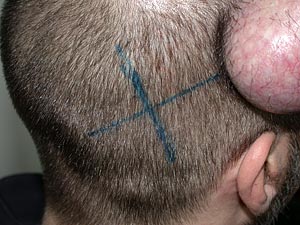 Where the rear 2.8" diameter expander ...
... will be shoved under the scalp.
© Soulless 2006
Human scalp is supposed to be rather soft and removable from the skull with no more force than needed to peel an orange. But alas, obviously not mine.

Already when he was anaesthetizing my forehead for the first operation in March, he had quite a bit of trouble just getting the needle through, and I still remember the surprisingly loud ripping sound it made each time he finally managed.

Same as today. But then the rest was something else. While I was dizzily floating on the additional stuff they kept pouring into me via the intravenous drip, heard him saying to the others that he'd never encountered anything like this, and I'm sure he (partly) scalped quite a lot of people yet.

Next he starts complaining that his surgical scissors worth a 170 quid will have to be replaced after this job (though he was polite enough to add this wasn't really my fault). But the skin still wouldn't come off so he could shove the implants in, though he already had made longer cuts than planned.

Then while he's going at it harder, I gather that obviously I'm also bleeding much, much more than they would like me to, though they're also infusing me adrenaline to prevent just that. Then they must've increased the floating stuff for good, cause next thing I'm realizing is that I'm mixing up languages when asked something, and then can't remember much till the last pieces of stitching up (still with that lovely sound).

Even despite my quite stuffed nose could smell my own blood. There was a lot of tissue and stuff under my neck, now all soaked well, and still my T-shirt's also wet from the neck down to the shoulderblades. There's even pools on the floor which the assistant will have to clean up before the next patient.

There are more gory details and mishaps before I finally was back here and able to eat something, but I'd say that's enough for one day.