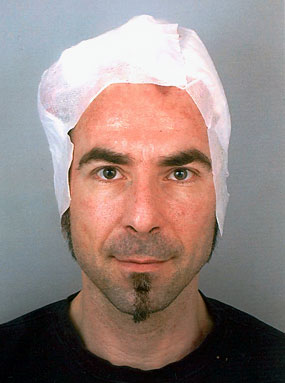 Well, at least some impressive bandages ...
... though I had to get them replaced immediately.
Just after surgery, 16. May 2006
© Soulless 2006
Maybe at first I was being a wee bit overconfident about the outcome of yesterday's surgery. Not to mention the 'other mishaps' etc.

Actually felt like hitting myself (again) for being so stupid. Cause that's just what I did, when getting out of the car after being driven home from the beauty farm by my mate.

Now there's a few dont's after head-surgery, the two most important being 'don't bend down' and 'don't lift weights'. When having the first lump removed in May, only once I forgot about the first when accidentally letting something drop on the floor and instinctively bent down to pick it up quickly. Outch!! Never did so again.

So this time all the way I was very conscious always holding my torso and head upright. Though probably wasn't too much of a smart idea when getting out of the car. Promptly hit my head at the doorframe, just below the front end of the right implant. F**k!!!!! Stupid, STUPID me!

Didn't feel much, cause of the local anaestetic still being in full effect, but gave me quite a fright. Also still didn't like the feel and even less the gurgling sound after a while.

Of course soon afterwards felt like something warm dripping down my head filling up my right ear, though was hard to be sure cause most of my head still being numb. But when I carefully lifted the lower end of the bandage to feel my ear, not really surprisingly was all red afterwards and also started dripping down my throat.

So straight back to the beauty farm. Fortunately after removing the bandage he said it didn't look too bad, disinfecting everything again and then putting up a new one.

Still, when finally at home and getting a visit from the old lady upstairs cause she'll be going away and asked if we could empty her letterbox, suddenly felt it dripping warm down the back of my head again, just in time to grab a towel to soak it up. Still a bit embarassing, though she as generally was really cool.

Wasn't the end yet by far, but I'll spare you the gory details about my pillow, just mentioning that I'm glad it's completely washable.

And of course the real party was only about to start as soon as the local anaestetic eventually wore off. They'd given me some strong painkillers to take with me, but still there was no way to lay my head down and sleep more than maybe half an hour at once.

Though when changing the bandages again yesterday it was still looking quite o.k. ...
Posted by Matt at 6:53 pm