Why does my head feel so bad?

Again couldn't sleep much more the night after. Even worse, when finally getting up had severe problems opening my right eye. Went checking in the bathroom mirror and instantly found out why: All of the right half of my face was pretty swollen, and below the eyebrow even some more. 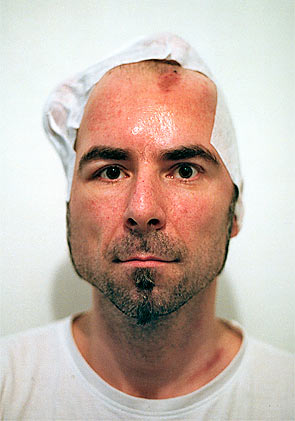 © Anger 2006
Aw, lovely! So next to my usual vaguely elephant man style silhouette and my newly shaped forehead like a mixture of Frankenstein vs. Klingon, why not add a bit of Quasimodo to the collection?

Also had partly profuse sweatings every once in a while. Probably also from the morphine style painkiller drops I'm swallowing in addition to the regular pills, but even with the full dose was still hurting real bad so I could hardly lay down. But unfortunately sweating is just another of the dont's cause of danger of infection, and generally all of my head still being pretty warm.

Fortunately the surgeon then said the swollen face was only lymph and no internal bleeding, i.e. harmless and to be well again in a few days.

Though the sweating and the tempeature he didn't like at all. Already was talking about putting me into hospital and probably having to remove the implants at once, especially in case my overall temperature should rise despite the antibiotics I'm swallowing twice a day anyway. Also he said that the pain should have eased off dramatically a while ago.

So of course wasn't happy when during the evening my overall temperature started rising from 36.5° to 37.3°, while the pain just stayed the same.

Also felt quite dizzy most of the time and generally not well at all.

At least could sleep some 60-90 minutes every once in a while and in the morning even 4 1/2 hours at once. And though my right eye was swollen again, at least the pain started easing some, my temperature was down again, and generally I felt a lot better.

Also when I went for another change of the bandages before the weekend he was eventually quite pleased about the healing process too, so everything should go on as planned. Halleluia!

Still he advised me to take the antibiotics a while longer, and I'm afraid I'll just have to stay strictly in the flat for the whole bloody weekend.
Posted by Matt at 10:35 pm