My favourite scene of David Cronenberg's remake of 'The Fly' always had been the one when Seth Brundle is in his bathroom in front of the mirror, looking at himself in horror and slowly realizing something must be wrong. (In his case that he's transforming into something half human, half fly because accidentally his DNA had been mixed earlier.)
I guess everybody has experienced something like this sooner or later. I mean that you're being sick or anything else but sober and looking into your bathroom mirror and go like, gulp, aw, no, do I look sh*t, oh my God, that's no good, what happenend, this is not me anymore, or at least not how I want to be, please, make it go away and give me back my life, or something similar.

Of course this scene in the film plays with that, though later Seth starts discovering really strange things on his skin, so that you'd probably at least would need to have dropped plenty acid to see something like that on yourself in real-life.

And yes, in the end he notices something sticking a bit out of his neck, and then pulls out a massive and looong fly hair from below his skin.

Which eventually brings me to what friggin' happened to me today.

When undergoing plastic surgery to remove the first lump on my foerhead in order to cover the hole the surgeon grafted some skin from my throat. (I'll get back to the actual surgery later, incl. some tasty pix, promised.) So now I have this fresh scar on my throat as well that I have to attend with silicone-cream twice daily.

After a while one part of the scar began to grow a little lump, that also usually looked a little red, so my guess was that I'd develop a sh*tty keloid there. Though it didn't fit this theory that at some point I noticed a little bleeding below the skin. Also the lump started feeling harder and edgier in time.

But today, when I started treating the scar, the lump was a bit reduced, and I noticed something hanging from it. A piece of skin that had peeled off I gathered, so I tried if I could remove it softly before it would get stuck e.g. in my hoodie's collar and being ripped off less gently.

But as soon as I started pulling, my heart just staggered! Because yes, it did start coming off, but instead of plucking the bit off, I found myslef tearing something hard in the shape of a cork screw out from below my skin, growing long and loong and even longer!

Aaargh! I'm in the wrong movie!

(And I'm totally sober by the way!)

Ok, in the end wasn't really as long as Seth's fly hair, actually stretched out only about two third of an inch, still rolling itself up into a neat cork screw shape. Obviously the surgeon must've sewed the deeper parts of the tissue with some string that's supposed to dissolve by itself after a while, but since one part must've been stuck inside the scar, it didn't disolve but rather was getting shoved out by the skin. Or at least that'd be my guess.

PS: Turned out I'd guessed right: 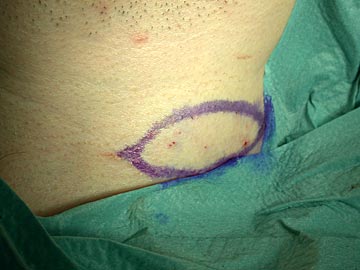 The marked area where the skin will be removed for grafting.
© Soulless 2006 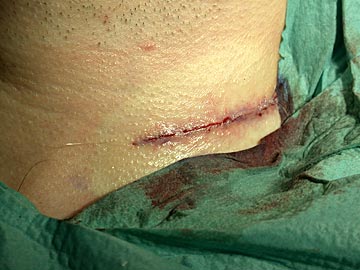 The stitched wound after the marked part having been removed.
Note the transparent string sticking out at both ends. Stitching is done below the skin, string is to dissolve within 4 months -- though sometimes, like described above, rather gets pushed out through the skin before doing so.