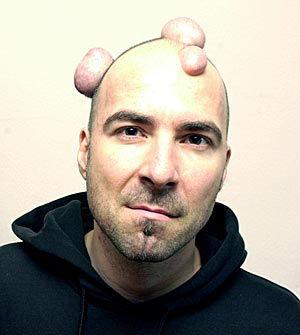 He had lots of burn scars in his face and on his arms and shoulders (and probably on the torso as well), and he was wearing a muscle shirt.

I always was (and still am) well aware that I'm in the lucky position that all my lumps still just fit under a cap (though I had to start buying bigger ones during the years to be able to go to work) and that -- unlike others -- I always had the choice to do what I'm eventually doing these months, i.e. having them removed.

Still, in the fraction of a second I just perfectly understood the way he was looking. And also why he didn't opt for a long sleeve.

The former cause it's not too pleasant when people stare, frown or even turn away in disgust just because of the way God, nature, fate or whatever had chosen to make you look like.

The latter cause it's no real use to try to conceal it at least as much as possible. People will always notice sooner or later anyway. And, bitter as it is, usually later is even more painful.

Respect, man! May you know people who take you for what you do and are and not for what happened to you once.

Labels: Pariah (Always felt like a), Quit staring will ya?