Till yesterday I was in Berlin for some shows. Mayday I had a day off, so in the evening checked out a few bands at the open air party around Oranienstrasse. After a while it got dark and I decided to go over to the place where I stay to have some food and generally gear up for the afterparty.

Which was when it happened.

Just had eventually been able to borrow a bike the night before and was still really delighted about that. So I was pushing it over the street which wasn't too easy cause the place was mostly packed.

When suddenly somebody ran into me, pushed me over and went down on the bike himself.

So as soon as I got back on my knees, turned around yelling 'Hey, my bike!'

But in the meantime a not so little but rather bulky green alien from outer space had jumped on the guy and my bike below him -- and already I was up to a really close encounter of the unfriendly kind with another green martian in riot gear myself.

(For those of you who don't know: German coppers wear green.)

Cause right behind the first one came the next and of course jumped right on me, as eventually the rest of the troops arrived.

Right, wasn't exactly delighted about all of that. Actually rather majorly pissed, but still wise enough to know that probably wouldn't really be a good idea to try any funny stuff now. So as the green guy started yelling at me to stay down, told him I would not resist or make any trouble and did so.

Though of course every now and then with an occasional 'But I was only pushing my bike over the street!' inbetween.

Then some couragious folks obviously in favour of us arrestees started throwing bottles.

Well, thank you very much!

Face down on the ground, splinters raining down from everywhere, cutting my fingers while the martian starts cuffing me. Followed by more bottles, even a whole one bumping on my head, though luckily not with real force.

Guessed I was pretty f**ked anyway, cause Berlin cops have a bit of a rep and because of some writing and talking stuff I do about unsavoury coppers I'm generally aware of way too many examples of at least some of them never making "wrongful" arrests at all (bad career move), especially in riot situations. So whoever is taken into custody by mistake will just be framed and buggered thoroughly.

Though besides that already considered myself just lucky. Cause the copper didn't hit, beat or kick me at all. Actually didn't even kneel on me hard. Also didn't close the cuffs too tight, and when they lifted me up later, did so at my upper arms and not by the cuffs.

Of course still wasn't nice having to jog along between them, my head being pressed down lower than my hips and so not exeactly getting enough air at all. Also my cap started slipping off, so I asked them to remove it before it'd also get lost.

Which led to the minor 'fun' part of this glorious evening. Cause as we arrived at their parking lot and I was told to squat down and stay on my knees, the rest of the troops gathered to have a look at their prey. Which was when one of the female martians blurted out the lines about getting a medic which I used as this entry's title.

Only thereafter one of her male collegues asked me if something was wrong with my head. Ok, no jokes here about 'coppers having taken me with them'. Just told them no, that on me it was kinda normal and no problem, and that I'd had them already before they booked me.

But the woman just went on for another while like 'But this can't be, have a look, he's got potato-sized lumps on his head!'

Actually I think she's just quite a considerable and responsible person, and she's got my respects for that, and may she not be mobbed out too soon.

Don't know what she experienced on earlier missions, but I for my part do know that people being hit on the head with e.g. police batons can develop lumps that look just too similar. (And also that considerably many of them die of brain hemorrage a few days or also years later, but that's another story.)

Now I think you might doubt that, cause I found it hard to believe first myself, so I'll just add two pics at that speak for themselves: 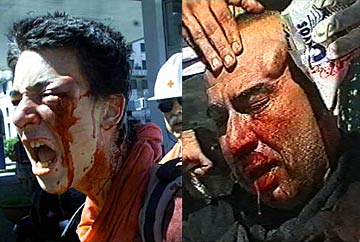 To cut it short, guess (and also was told so by other people) I was just one really lucky guy in the end. Cause contrary to my fears of getting framed there was one policeman who had clearly seen that I really was just pushing my bike across the street, and he even told his collegues. So little later I was uncuffed and sent to the guy that had jumped me for getting debriefed (and having my ID checked and noted).

He didn't actually apologize (guess expecting that'd be taking the boat out a bit too far). But at least he stated that, after first assuming I was with the guy that ran into me rsp. that I was coming for his aide, later it was established by his collegue that I was really just pushing the bike across the street. So that after initially having me deprived of my personal freedom, now I was allowed to leave, and that he wished me a good evening.

Actually first almost couldn't believe it, because as said I know other places and cases where I'd bet my last penny that the collegue rather'd be having a thorough look at my face and then saying something like: 'Yes, that one with the BLUTGEIL-shirt, I recognise him, that's the one throwing the stones!' Then another would come and also swear the same. And in the end doesn't take too much of a prophet to tell whom the judge will believe.

So being really relieved, I wished him a good evening too once his duty'd be finished, and went back looking for the bike despite his warnings. ('Remember, a life is more worth than a bike.') Fortunately it was still around, though in the process amongst other minor damages somebody (probably in green) had stomped on the back wheel real bad. But that again is another story.