Mate told me, when going to the photolab picking up a developped film plus prints, as usual casually asking, 'And, did they turn out well?', all the woman behind the counter replied being, 'Uh, erm, uh.'

First just shrugging it off, at home soon decyphered the deeper meaning. Cause a special service of the shop is turning the print on top upside down, so when you grab the pile out of the envelope there wouldn't be any prints on it. And yup, as it happens, the one on top being just one like this:

So guess it's about time for another huge photo update, also cause up to now always was too lazy including the surgeon's last batch as well. (Sorry it took so bloody long to finally get it online!) So, for general viewing you might recheck here / here / here. Plus for the less squeamish, graphic additions here / here/ here.

Woa, still wish all the dumbfu**ked people giving me stoopid looks on the train when going to see the surgeon having the wounds rinsed out with desinfectant, squeezed out the coagulated blood etc. and the progess of the necrosis checked, could've seen what it looked like below the bandages. Not to mention me their faces.

And especially what it loked like the week between the last 2 jobs (i.e. cutting the the dead part off and a week later patching the open wound with another graft):

And while we're at it, here's the whole thing in closeup from necrosis to the fresh graft:

Allright, as you all can see below, in the meantime indeed looks quite a bit better (the shots from a week or so after the graft at the moment still don't have yet). Though as predicted nothing that'd actually make a difference compared to what it looked like before, if you ask me. 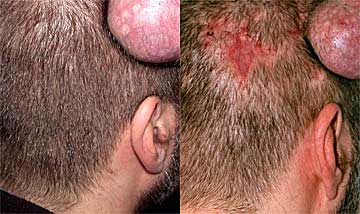 Which reminds me, when seeing the surgeon for the last time after the last surgery, how he said, 'Looking well, finally everything healing best possible.'

But still not objecting when I replied, 'Yeah, but nonetheless just looks like s**t.'

Well, hope next one will work out better. Not to mention less painful. Two days to go.

PS: In case you were wondering ... Yup, the title about the complication's complication of course is another immortal line I just couldn't resist nicking -- shame on you if you didn't recognised it immediately. If so, consider yourself being urged getting yourself a copy of Terry Gilliam's hilarious and brilliant film Brazil and (re)watch it at once.
Posted by Matt at 3:52 am