... but still think puncturing the lumps being already fun enough for my tastes, thanks.

Already had been to the surgeon 3 days earlier on Monday. Just for having the remains of the formerly dripping lump examined. Him quite pleased how small it had become (though actually in the meantime already started inflating again). Since in the meantime the wound had closed nicely, to my amazement said looked pretty ok and that there'd be nothing more to be done at the moment. 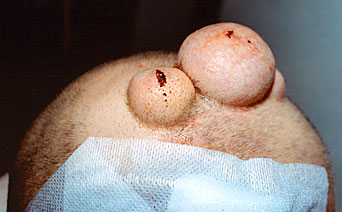 © Anger 2006
So only returned for the scheduled 2nd puncture Thursday. Big lump feeling quite stuffed and tense again. After having cut a small hole into it with his precious scissors, immediately yelled for the bowl he at first had figured could do without, remarking, 'A veritable fountain.'

Ok, at least didn't reek like the other one last Sunday. Again he said the smaller'd look just fine (though again having inflated some more). Really had to insist till he eventually reopened it. And surprise, surprise ... immediately wrinkled their noses, him going 'uh-oh', while the assistant quickly to open the window.

Not that I would've objected. Heck, stank even worse than Sunday morning. Suddenly surgeon also saying nothing more about 'looking well'. But rather stated 'infection', plus having another sample taken and sent to the lab for analysis. Plus no 2, going back to the beloved daily rinsing routine, again. Well, halleluia anyway.

At least reassured me the stitches on the side my hand looking fine, so hopefully no sh**ty scar like the one on my arm.
Posted by Matt at 1:47 pm