Just when I thought I was getting better ...

Lump developing fine, stuff becoming less smelly, though still having to be rinsed daily. Should be well again after some more days of treatment, as both my doctor and the surgeon agreed. So far, so cool. Just wish could say the same of my hand.

First had looked and felt quite ok, so was already getting my hopes up it'd be like new again in a matter of just a few weeks.

Till after two days suddenly this special kind of pain kicked in. Each time when making a 'wrong' movement, will get this electric shock, starting from one part of the cut going all down my little finger. Like touching a cattle wire. 10, 15 times a day, especially while at work. And also the sensibility on the topside of the little finger degrading drastically, like after having hit the buzz-nerve at the ellbow.

Aw, f**ck. Though always being accused of a way too pessimistic general attitude by some, once again turns out probably I've been way too optimistic actually.

The surgeon confirmed my fears when seeing him to remove the stitches, saying this being the obvious symptoms of a cut nerve running amok, trying to reconnect but failing, urging me to go back to the emergency immediately to check whether it could be fixed micro-surgically, before the cut off part of the nerve would die and the rest probably developing a really painful knot while building lots of branches, trying to reconnect in vain.

F**ck, there goes my already booked flight for some more UK-shows, same as going to Germany before. Still remember me jumping up and down joyfully in our flat when getting the show in Berlin confirmed, still having this undying grin all over my face when straightly booking the onward flights. Just what did I do to deserve all of this? 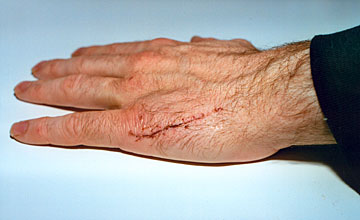 So straight back to the emergency. Finally seeing a hand surgeon, she confirms that there must be a cut nerve, though fortunately just a minor one of the skin, responsible 'only' for sensibility and not to move the fingers etc. and also fortunately at the topside of the finger only.

So she rejects having surgery on it now, since the sensation might recover at least partially by itself after some time, only if the nerve should build the painful knot in a while, I could've that treated.

Looks like I'm just lacking the expensive additional private health assurance I couldn't even get if I had the money cause every company would refuse me cause of my lung. Th**k you very much, too.

However, I'll have to be back for another appointment within a good week, though no more appointments available this week. So, at least, after topping our medical supplies, looks like being off to Dresden and Berlin only with a few days delay. Though in the end I'll have to return to Zurich for the hand and the lumps instead of going straight on.
Posted by Matt at 2:27 am