Sometimes I think women can be much harder on what they might consider as others' physical flaws, especially other women's, than any man could ever be. Like e.g. when hearing my then girlfriend's above comment on the below pic. Also the 2nd part she didn't say but which was written all over her face: 'And no tits!' (And you bet it wasn't about me.) 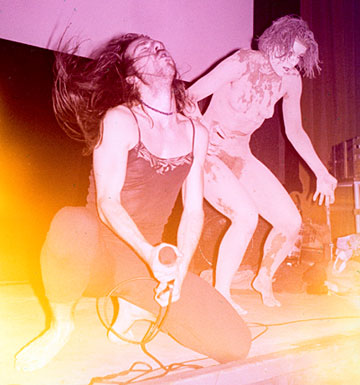 © Pszychisz Teror
Now I'm aware that, for some reasons not too hard to figure out either, concerning the woman in the picture I might be just a wee bit biased myself, though obviously rather the other way round. (Cause even after eventually falling out of love a little bit always remains, at least in my heart — unless I'm not on another stint in numb limbo, that is.)

Not to mention generally my idea of the ideal female body not exactly being the one e.g. propagated in most ads.

Plus, and not 'just for the record' (but merrily humming along to the tune of 'some of you niggas is bitches too'), didn't mean my statement of women as compared to men in an absolute way, i.e. hinting rather at issues of gender and not talking of a person's sex.

But having said all that, and in addition also considering between women there's usually more competition for looking good than e.g. being rich, still found it pretty hard to swallow or even dig.

Actually till today sure beats me flat and I just remain puzzled.

Anybody able to fill me in?

[Well, actually bloody obvious, innit? 'Apparently a body fascist is someone who is insecure about their own body and so projects their own insecurities onto other people with less-than-perfect bodies in order to feel better about themselves.' The irony rsp. inherent logic being, 'twas the same person doing so accusing me of being a 'body fascist' in the first place. However, am afraid I'm still not able having that much a crack at that like the guy on whose blog I found the above def, though of course he's just got it: 'comedy gold'.]