When the pus hit the fan

Yesterday went for luxury, i.e. having a shower at Reiche and then doing the lump cleaning there in the bathroom.

For the first time in two days removed the bandage from the small one. Had it filled up one last time in Dresden and then just let it be as the doctor had suggested. Looked quite nice, wound closed, no signs of infection. Woa-whoopie! 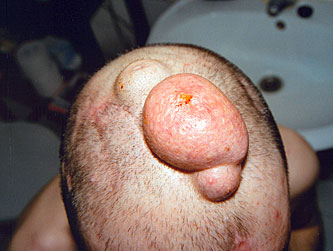 However, when touching it accidentally while working on the big one, the nicely-healed-up-looking wound just burst open again, the stuff coming out smelling only too familiar ...

Aw, would've been so nice. Though obviously just wasn't ment to be.

Usually people are telling me that they find it amazing how I'd always be so merry and uplifting despite the various troubles and complications.

Later went to meet the Oli, the guy who'll be putting up the film screening Sat. Working in a bar tonight and had invited us. Now, though -- as you might know -- I'm usually happy about pikeying free drinks and party life, and also about taking the p*ss outta people asking me bout the bandages n stuff. However, this evening just felt down, down, down.

Or, as Oli so fittingly put it, 'Maybe tomorow I'll laugh about it again. But not today.'
Posted by Matt at 6:29 pm