Dissent or rot (Always felt like a Pariah Pt. 2)

Having grown up in a conservative household during the cold war, you can bet I was told about the brave dissidents within the then actually existing socialist countries. Being a good boy, of course admired them too. Actually a bit too much perhaps. Not for my tastes, but obviously for almost everybody else's.

Though barely a teenager, didn't take too long till I realised, while my parents did have two volumes of GULag Archipelago displayed in their bookshelves, hardly bothered reading any of them (ok, didn't do so myself till pretty much later). And when after Prague '68 many Czechs got offered asylum in Switzerland, surprisingly most of them being well trained lab workers or other studied professionals, not to mention usually not too adamant to criticise injustice here or elsewhere. And while my parents and other grown ups continued idolising foreign dissidents and their brave struggle, the longer the more I realised they'd be the last having the balls to stand up and risk anything for an unpopular conviction themselves.

Not exactly my kind of heroes, I'm afraid. And very unlike e.g. Adam Michnik almost a decade later, defiantly proclaiming stuff along the line of 'you can lock me up, but but you won't make me comply'. And while I might not agree with everything he was about lately, still respect him for having the guts of sticking with his creeds (though perhaps it's no coincidence that after Abu Ghraib western newspapers started qouting him considerably less -- if at all). Cause that's what it's about, not blindly doing as you've been told, but making up your own mind also if the consequences are a bit less favourable.

And while I despise violence and lynchmobs, when walking the street with the ordinary looking house where the torture cellars were and then visiting the nearby park, seeing the trees still standing where the people after liberating the prisoners had dragged the screws and strung them up in Budapest '56, couldn't condemn them either nor help myself thinking 'yes!'

But even then, even in my remotest dreams never dared thinking I'd ever be doing time myself. Even less in an increased security jail in the 'model country of democracy'. Not to mention that it'd be for the "thought crime" of having made a film the local authorities obviously didn't like -- just like in one of these dreaded oppressed communist countries they'd always been cautioning against at home and in school ... 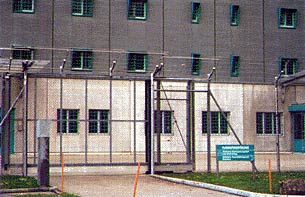 Zurich Airport Prison, 2000
Which is where I finally started reading Solzhenitsyn's GULag Archipelago, beginning with the 3rd volume, embracing it like few books before. Cause, despite considering myself lucky, like after my short stint 'only' having to swallow cortisone for some 5 years insted of having been plain snuffed like in the 'real thing', it was all there: the humiliation, lies and deceits by the screws and administration, the 'games' amongst the inmates, but also the gallows humour, and the biggest paradox of it all: 'I'm grateful for the prison having been a part of my life. It was therein that I nurtured my soul ...'

Not to mention realising, the prison outside being only a slightly watered down version of basically just the same. But you know what? 'You can lock me up, you can abuse me and kill me, but you won't make me comply ...'
Posted by Matt at 9:40 pm