'Superbug claims 49 lives in top hospitals' -- just the kind of headlines I'm eager to read, but nonetheless the front page of the Observer the day I got back to London. And that's not even it: The above figure's just the as of yet confirmed casualties in 3 Leicester hospital during the past 9 months alone. Plus some other 29 'suspicious cases' still being examined by the coroner, thanx.

Now it's kinda reassuring reading on that the risk of death by the 'superbug' of the tell-tale latin name Clostridium difficile is considerably higher when undergoing gut surgery (well, at least for me at the moment), plus that after infection first there's no trouble, only when you start taking antibiotics (in less than 2 weeks when going for the next round in my case). Also, that unlike other superbugs, C. difficile can still be treated with 'special antibiotics' (as long as you make it long enough till the test cultures are developped, I suppose).

However, concerning my daily disinfection trip, still reminds me of what several doctors and other professionals told me: Better having it done anywhere than in a hospital.

Which brings me to my problem: Since the holes in the lumpies are wounds in regular scalp, they're trying to heal up and close all the time. Which is more or less prevented by inserting the hypo tip several times every day, though sometimes not even that's an overeasy thing to do. But even if so, nonetheless the holes get smaller an smaller every day. Unless you strech (and not to mention rip) them bigger again every time, that is.

Also I got the impression the cyst-skin just below the scalp and around the holes also kinda dries up and in the process contracts, and this b*stard is even a lot tougher to rip open again than my 'normal' skin (which already made the surgeon complain it ruining his precious tools cause being too tough).

All things not exactly helping to keep them holes big enough for the daily treatment, though somebody has to do so.

Which of course is the 'nasty part' obviously not suitable for everybody, not even for the ones unsqueamish enough to do the actual rinsing.

Though I'm always instructing everybody to 'stay away at an arms length' and then while injecting the stuff to 'pull the hypo against you hard, harder, HARDER, doesn't hurt, and never mind the few small drops of blood, please', obviously isn't everybody's cuppa applying the necessary amount of force.

And even if the holes are rather big, you still need to stretch them a bit wider so the sparkling foam of the hydrogen peroxide plus also the excess iodyne can spill out nice n easy. Cause if you don't, pressure will build up inside the lump, and eventually spill out in a huge fountain.

(Which is why I tell people to stay away at an arms lenght and pull the hypo towards them, so that the stuff will spill out into the opposite direction.)

However, if you don't pull hard enough, the whole thing just seals tight after inserting the tip, i.e. you can't inject much, the lump just inflating a bit like some kind of thick balloon, and in the worst case the stuff incl. the nice bit n bobs just going back into the hypo. 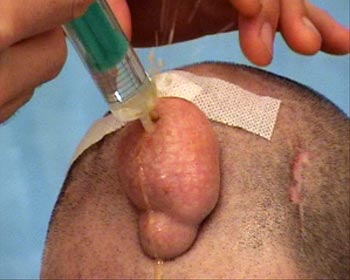 Oops, here we go ...
Not to mention when eventually pulling the tip out, there's a big splash all over the place, covering everything with juice and the other stuff. 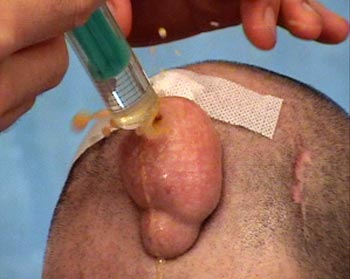 ... though only a perfectly modest one ...
Which is exactly what happened later the same evening, when the girlfriend of the mate I'm staying with did it for the second time. How much I said 'pull harder', just wasn't possible for her, so the outcome was inevitable. 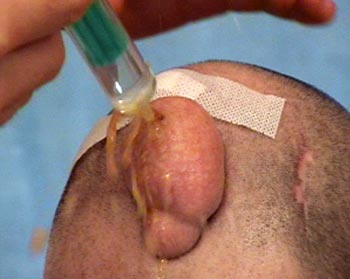 ... hardly going anywhere.
Sh*te, all the nasty pieces glued to the drawer, dripping from the wall, yuck! Must've stuck the opening as well. 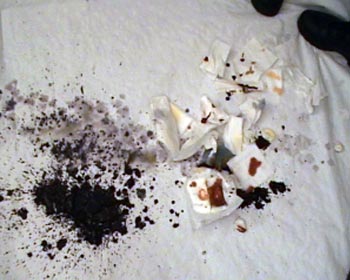 Just a fraction of what usually goes directly into the bag.
Ok, by now am used to the daily clean-up after the show, as I'm always sending out my victims enjoying the chocolate bribe as soon as their part's done. 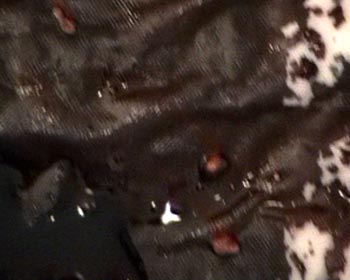 And here they are ...
But that sure was something else, woa! Also loads of cyst-skin, definitely more and fatter than usual, which looks even uglier than the normal stuff, cause it's really white and also tends to form small rolls, looking like some alien sorts of cockchafer grubs. 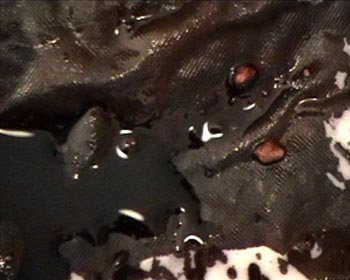 ... tasty little bits'n'bobs'n'pieces ...
Almost expected them pieces starting to wriggle while eventually wiping them away, just by the lovely look of some. 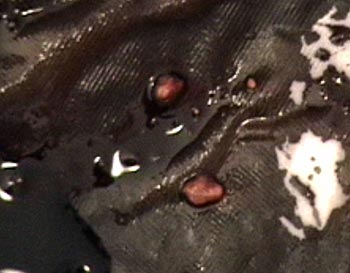 ... soaking in delicious iodyne. Yummy!
(Though only the reglar ones, m'afraid.)
First time before I was off to Scotland she'd also done it which'd been no problem, but perhaps she'd been more determined then. Also the skin of the whole lumps shrunk quite some since (which is the original idea behind having them punctured in the first place), which also doesn't make the treatment easier. Plus before I got away from Zurich Anger'd made sure the holes were nice n big.

So in the end she made clear it was too much for her and despite her original intention she couldn't do it anymore for the next 8 days. Ok, can understand that. However, still just got myself a new small problem dangling from my neck.

Cause definitely don't agree with her suggestion this'd be something best handled by doctors in a hospital at all. Cause on the one hand, most medical pros haven't seen anything like that before either, so they'd have to learn how to more or less from scratch as well (though probly being less inclined of admitting so). While on the other, as said, anywhere better than in a hospital, which is exactly what I'm gonna do, you can bloody bet.