Nice one for a change

Still a bit dizzy from the painkillers, though hope being off soon. Actually gave it a try this morning, but after a while decided sticking with them for another day and then try again. 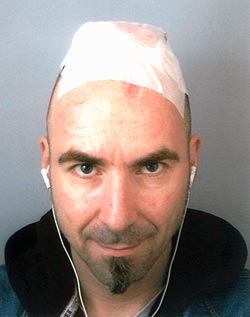 On my way back to the beauty farm, Oct 17th.
Changing the dressings, surgeon said he's still happy so far. And with me still on antibiotics there'd be no need of changing the drains daily, so I can just keep them in as long as seems fit before removing the stitches next week. Plus despite the original dressing almost dripped, over night the bleeding had almost stopped. So as long as it keeps developping nicely, my mate'll be able changing the dressings and taking care of the wounds no prob, so I won't have to travel almost 2 hours every day just for that. Knock on wood some more.

Have to admit, after having a look at the results in the hand mirror before putting the new bandage on, I'm quite pleased with the outcome too, especially with the lines of the wounds. Though am happy we took the time to rediscuss this in detail right before the surgery. Still think I wouldn't have liked the way he'd proposed doing it originally. I.e. like he'd done the lateral lump, leaving a cut around one half of the base, flapping the remaining skin of the other half round, tailoring it to fit. 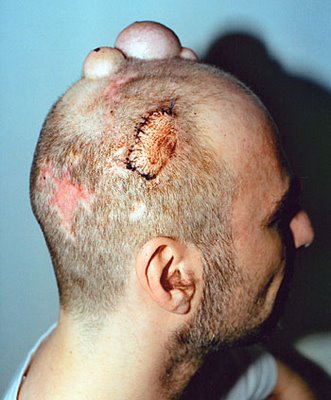 8th August. Lateral lump removed, ones on top punctured.
© Anger 2006
Now I can see why he preferred doing so there, mainly because now the scar's more to the back and can't be seen from front. But on the downside this implied using more of the skin on top of the lump, which's even more stretched and strange looking than the parts at the base. Which means now there's another more or less bald spot that won't recover.

Ok, on the top of my head probly won't have no more hair soon enough anyway. However, cause of the general condition of the skin on the lumpies, still think makes more sense leaving the cut in the middle, using the base skin from both sides while removing the one on top.

Fortunately wasn't a big discussion. And though I had visualised having it done more symmetrically, still won't complain for a change. In contrary, definitely like how the new cut kinda connects the already existing scars, with just 2 smaller vertical cuts on top to tailor the rest. Which I've to admit looks even better than what I imagined myself. Also think he did a good job by deflating and tailoring the tricky bastard a.k.a. the smaller dexterior lumpie. 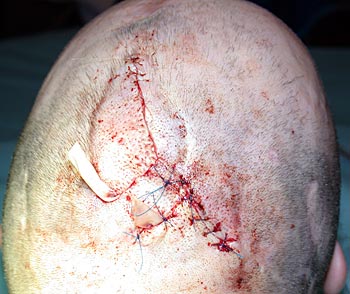 Just after surgery, Oct 16th.
© Seelenlos 2006
Well, maybe I'd also just lowered my expectations after some of the previous sh*it, but this is the very first time it actually looks better than what I had hoped for in the first place.
Posted by Matt at 8:56 pm