Was reading a book on the bench at the bus stop in front of Cowley Club in Brighton, when suddenly somebody passing by grabs my cap and takes it away.

I look up, turn around fast, slightly snapping. 'Hey!'

Stands there this girl with a pram, my cap still in hand, eyes and mouth gaping wide. 'I ... I only saw the cap!'

I reach out my open hand and in a normal voice: 'Gimme back the cap.'

She hands it out still gawping. Then kinda apologises and asks to shake my hand and afterwards leaves.

Frankly didn't really dig it, but no harm done, so cool.

Later reminded me of the one other time some years ago in Zurich when somebody actually apologised afterwards for gaping at me going 'Yuck! Disgusting!'

Wrote me an email later she'd also regret it cause she had a disabled brother and so was familiar with feeling uncomfortable on the street because of strangers staring. And that by the way she was also not being sympathetic towards violent coppers. 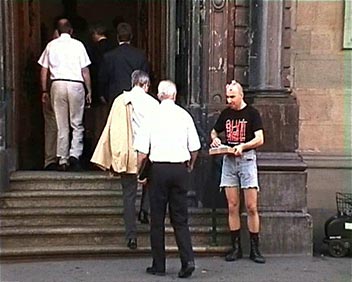 As admitted I know fairly well I'm kinda a provocation on legs when not putting on camo. Especially while e.g. handing out leaflets to local MPs with graphic images of people suffering severe acid burns after being douched with so called 'tear gas'. Which was why I did so after all.

Anyway didn't take the 'disgusting' part personal but related it to the flyer from the start, as she'd just been looking up from it.

So wrote her that back as well as no offence taken and so no need to have a bad conscience on my behalf, and that I just put her on the PigBrother.info mailinglist.

And yep, that's it. While there are many who apologise for their curiosity in order to land the question, that's actually all of them odd'n'strange exceptions of people who said sorry for treating me like a human zoo.