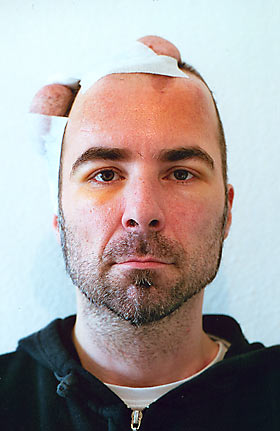 © Anger 2006
Don't get me wrong: One of the few things I'm proud of is that up to now I always could avoid getting involved in a physical confrontation, and don't intend to change that. (Still have been in plenty situations where afterwards even strangers told me that they were surprised I didn't start punching the stupid git cause sure they'd've done so bigtime longtime.)

But here I am, face deformed, eyes swollen and slightly blackened, my whole forehead one endless giant yellow-brownish bruise that just stretches on and on over my right temple including my ear and from there down the neck and throat to the collarbone. Not to mention rest of the oozing and dying skin all over.

Also feels like it. The cuts themselves thank God stopped hurting too bad in the meantime (and also finally are healing nicely), but the rest just pumped the pain levels back through the f**king ceiling. Not to mention the real ugly pounding megaton headache that just won't quit. 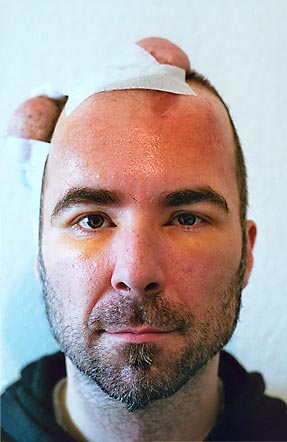 The 'feline eyes days'
© Anger 2006
But what really brings me down, is that I don't feel comfortable at all with how the surgeon is handling all of this. Somehow seems just going through the motions on autopilot, like having done this kinda operation so and so many hundred or thousand times already, so obviously knows it all anyway and therefore no need to bother to actually LOOK just once inbetween to check if my bloody case at hand actually fits his rules and regulations of what to do next today. Since obviously does NOT, and by the way just starts going tits up BAD again again again.

But all he's coming up with is more of the same plus the occasional oh, and should it really hit the fan we'll have to pull the emergency break drastically. Plus niceties like, probably you must've lacerated the skin by lying on it too hard. Yep, of course, especially like the part in question on which I'm lying all day long alla the time and also sleep on, cause since the beginning doesn't stop oozing and by the way also just bloody hurts like hell. Oh, but by now it shouldn't hurt anymore, so why are you still taking painkillers, you'd better stop that now.

(Ok, might've been a wee bit exaggerated, but just a wee bit and frankly most of his quotes not at all, while mine of course rather being what I thought than how I actually spoke it out.)

Though no, am not gonna punch him. Cause that's not what I do. Cause I'll be damned if I'll not find another way to get through with a wake up call rsp. my needs taken care of.
Posted by Matt at 1:41 am