Of course the pain just kept getting worse and worse as did the dripping from below the bandages. First just had to soak the trickle down to my chin only every once in a while, but later noticed that I started soiling my bed and the floor and whatever below me when not doing so constantly, so just fixed a lot of folded toilet paper below the bandage.

While in the beginning the liquid was much thinner than blood, soon became thicker and thicker and also started coagulating.

And my temperature started rising again up to 37.7°.

Cause of the pain going back to sleep was no option anyway. Considering the situation being more painful and ugly than immediately dangerous, in the end just sent the surgeon a txt asking if it was possible that I could come earlier that at 9 am like appointed (also figured neither me nor the other patients would benefit of him having a hangover from lack of sleep).

About 7:30 called me back and tried to comfort me, that he'd had a good feeling since the wounds had looked nice yesterday, that the trickle could only be the reddish desinfectant and not blood since it'd be impossible to bleed for so long etc.

Well, so much for my newly restored faith.

At least he agreed I could come 15 min earlier, which I'd planned anyway since I knew they'd be there quarter to 9.

Braced myself being sent to hospital immediately. So before going off to another painful 50 min bus and train journey, had laid out the papers my mate would need for the scheduled meeting early afternoon with the Prof for Popular Cultures of the local university concerning the course we'll be doing next winter semester (fortunately the meeting could be postponed for another week in the end), and prepped the powerbook to be shut down and packed.

To put it short, as soon as he'd removed the drainages and started rinsing the wounds another time (rrrah! lovely!), made a face and went on like (surprise, surprise!), 'But it's full of blood again!'

Hey, thanks for acknowledging, better late than never. Though he wasn't exactly delighted when I politely reminded him that this was just what I'd said on the phone.

Didn't put up a fight when he insisted the implants to be removed as soon as possible, which would be at 12:30. Left me just enough time to get back home taking a shower (only below my throat of course). Also still preferred another painful journey to hanging around in the surgery, though the assistant offered me doing so.

(On the last leg of the trip home had sort of a revelation in the bus about which I hopefully will be writing soon in a thread yet to be opened.) 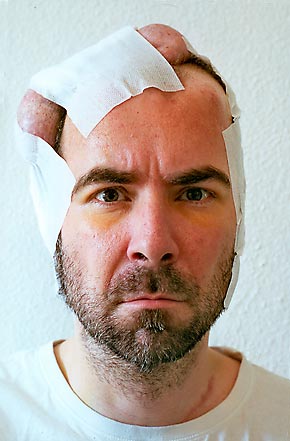 Just before going over to the beauty farm again
© Anger 2006
My mate was so nice as to drive me over. The surgeon was still rather pissed ...