Hammering a bit on the table, plus a special welcome

Awrite, guess I got some catching up to do, so let's go. 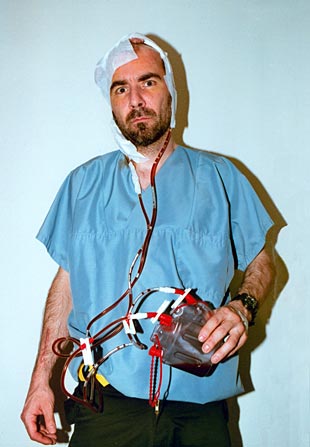 I just loved them ...
... though they didn't play music actually
© Anger 2006
As hinted, as long as I had the blood-ipods, everything was swell. Means, not too much pain, no swollen face and especially no bloody megaton headaches anymore. Unfortunately, after 2 days he said something like 'Oh, only 10 millitres since yesterday, that's nothing, so that's it; at least you'll feel lighter now when you don't have to carry them anymore.'

Bit afraid of what to come, asked him to put at least some small passive drainages in everywhere. Which only got me a mumbled reply that could have meant 'Yes', or at least hoped so. So went home and, still being a bit tired, laid down to sleep some more.

But as it had to come, about an hour later woke up from the pain. Pressure behind my left eye, starting to feel swollen again, lovely headache building up and taking over. Eventually called him and asked bout the drainages. After another not too specific reply finally dropped the bomb: No, the left one had looked real good, so didn't put one there anymore. Plus other niceties like, if there'd be too much problems like that it'd be getting too much for him and he'll just have to transfer me to a hospital.

Well, just the sort of good news I'd been anticipating anyway. Actually felt tempted having him do just that immediately to at least show the whole problem to somebody else, too.

Though odds were quite more than 50% to end up in the same hospital where I'd been abused as a human guinea pig already, so that I'd trust people there even less than him (which actually would've been the case, as I found out later). And my trusty GP also wasn't available cause today being kind of a holiday (had tried to get an appointment before calling him up).

So in the end decided that I'd just go back to standard hospital procedure, i.e. the next day not having him treating me except when my mate'd be present, so that I'd at least know what he'd done and what not, and that he also could take some more photos so I'd have a chance to see myself what ws going on at the back of my head anyway.

So when I was in the chair and he came in, told him so. To which (surprise, surprise) he replied, no problem, that they'd just remove the bandages and treat the wounds, and that my mate could come in thereafter.

So I said again friendly that I'd like my mate to come in right now. But by then (surprise, surprise no 2) he was already pointedly turning away talking to the assistant as usual.

So I decided to opt for what in retrospect already should've done a week ago at least. I.e. slightly hammering on the armrest with my fist, while raising my voice just so much that it'd be heard also outside the room (but not outside the house - yet). 'But I said I'd want Mr Mate to come in NOW!' Plus keeping repeating it even a wee bit louder (but still fairly moderate) when they tried to just BS me some more.

Ah, sometimes it's just invaluable having some years of practice being the bawler in a band.

Since -- you probably guessed it -- suddenly was no problem my mate coming in rightaway. Even were happy getting him immediately! Also no problem him taking some pics!

Even the better, afterwards -- though tempers still running just a little bit high inbetween, and to be honest once I also had to accept being told letting him finish his statement too -- was possible talking some things out I'd been trying to for quite a while. And he started considering more that generally and also specifically almost everything seems to be bit different with my body and skin than what he's used to. Plus we also talked some partly more personal stuff, explaining why we'd acted as we did.

Even more better, at least up to now therafter continued listening when I say something. (And me on the other hand, of course always tell it completely politely like before.)

Concerning my head, the present state of things is that I still have to go each and every bloody day having 2 of the 3 wounds rinsed out, cleaned and desinfected. But at least it looks better now, and also the last smeartest was completely negative, so no more infection, phew. (And yeah, was considerate of him to sacrifice his own weekendtrip for doing so, and I appreciate that.) Concerning the hurting and oozing skin, which is the real bummer, probably will need another surgery plus skingraft to be just back again where I was before returning to Zurich, if I'm lucky (with the exception of some unpleasant memories and some additional scars 'n' gray hair, I'm afraid).

Funny part is, while earlier remarking that I was 'indolent' (i.e. unable to perceive pain) concerning the actually quite painful cleaning process, from monday on always asked several times inbetween if it was still bearable, also explaining why it was necessary, though think I'd never complained to him or even mentioned that I'd not actually consider myself indolent at all, but that it's just that I can bear it cause I know it must be and will be over soon (contrary to the ongoing pain if it's not done), and last but not least cause endorphine is my trusty and reliable friend in such a case.

Of course just kept telling him as it is, i.e. yeah, no problem, actually being peanuts compared to last week, and that I'm grateful he's doing a thorough job and not taking any risks, cause, knowing my body's tendency to attract complications, that's just the way I prefer it anyway.

But back home, suddenly realised, guess maybe it's about time to specially welcome a new reader to this blog (though probably better not by name).