As far as I can remember, before I was 5 probably not so constantly, though. Actually got along well with virtually all of the other kids. Until then only on a few occasions had this feeling that in the long run kinda just might not fit in.

Like e.g. when I persuaded my brother to polish this arrogantly gleaming new car in the street with sand together, making it look more natural. Gee, were my parents happy having a liability insurance. Though I must say they weren't too hard on me, more like, don't do it again, this can give us lots of trouble, so of course I obliged.

More difficult was when one morning I went with my then girlfriend to see where she went to kindergarten (she was a year older than me, but didn't have to go that day cause of holidays). Must've been after 12am when we eventually got back. Whole flat full of cops by then, and it was let's say kinda less easy than after the car episode. Though I could understand that my parents were worried, still never really got it what all the fuss was about. Maybe the first time I started realising perhaps I wasn't as free as I had imagined all the time, and not only me (though the girl's parents treated it considerably less as a drama).

Of course the real trouble started when I had to go to kindergarten and then to school myself, though grades weren't too much of a problem. Contrary e.g. to the plenty hippocrite grown ups in charge, handing out bollockings and punishment even when for everybody else it was plain to see it was THEM that were wrong.

Though I must admit, one teacher, once when giving a poor italian kid a dressing-down for a simple equation she got wrong for whatever reasons, after about my 5th attempt to set things straight actually listened to what I was saying, did the calculation again, and thereafter apologised to the boy. But even for the gullible 7 or 8 years old I was then, it was bright as the light of day that, had I not been the kid with the good grades and the respectable parents, probably she wouldn't have listened at all in the first place, so this remarkable incident not being much more than the famous exception proving the rule.

The other problem being plenty of the kids as well, convieniently just passing their anger and frustration on. Ok, probably was just kinda the perfect victim; first fitting the concept of the enemy, and second, though never having been really religious, I never hit back, not even tried running away, but actually just literally turned the other cheek, eye, side of the ribcage or whatever. Still have one or the other scar to remind me.

(Took almost 2 1/2 decades more till I finally gave in, rather literally drawing back my arm in order to get spared rsp. not getting f**ked over in other ways. Though without never actually having had to deal the blow -- and the coward bullies probably just passing it on to some other poor bugger not willing or able to hit back, or sometimes even just onto themselves if they couldn't find another victim -- which till today is the part still bugging me every time I manage keeping myself outta harm's way like that.)

Little surprise when playing indians and cowboys usually sympathised with the redskins and not the whities, getting extinguished by the latters, but at least knowing how to die beautifully and with dignity.

So, when eventually the lumps started growing, as mentioned was neither really surprised nor too embarrassed, but rather pleased, cause at least to me it made perfect sense, like getting a physical proof for what I had always felt inside anyway. And wanting to get rid of them now and getting into real trouble for it or not, actually I'd still be more irritated by never having had them. 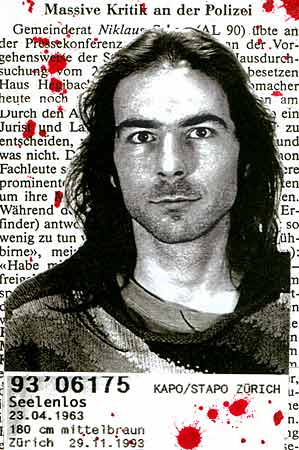 Did you see him smile?
Mugshot, 1993, used on cover / poster
of The 'BLUTGEIL Case'
(Lump on the forehead already visible, while
the one on top increasing my height about an inch.)
© SSI / TV-STOP
Posted by Matt at 12:58 am