One of the deadly sins, I reckon, i.e. not only for Anti-Body-Fascists. Nonetheless am afraid I'm quite a vain person. Probably way too vain for someone of the size of my nose, truth be told.

(Though of course barely hindered by such 'friendly' dos and don'ts.)

Frankly, never got it what everybody was complaining about urgently having to lose weight. Made from merely skin and bones, all I ever wanted was TO GAIN.

Always people taking the piss, my parents would let me starve or, as I grew older, if I was still on hunger strike. In hindsight considering myself lucky having been a kid before 'anorexic' and 'bulimia' becoming the buzzwords they're today.

Always people around me trying not to eat too much. While I keep forcing myself swallowing meals for two so I don't feel (ok, and look) too weak for all sorts of fun. 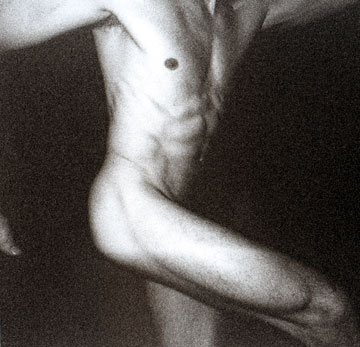 No matter how much I ate, else never showed. First time in my life I was thinking bout shedding some was while and after the cortisone therapy. First time I ever put on fat. Doubling the layers every few months. Till reaching the point of definitely no more liking it. Though I have to admit, in winter actually comes in handy. Also dropped some quickly after finally getting off the nasty stuff. Still probably never again like on the above pic. Sigh.

Not to mention losing hair (but still not being rich -- though that's another story). And the nose. And just straight on and on.

As you can see, guilty as charged. Vain as vain can be and way more vain than an average male's supposed to be anyway. Not to mention still too thin.

(Though not hindered by that either.)