Whoa, I did it! Actually had thought might been a bit an exageration the surgeon telling me earlier my strange skin would ruin his precious surgical scissors, but well, here's the proof: 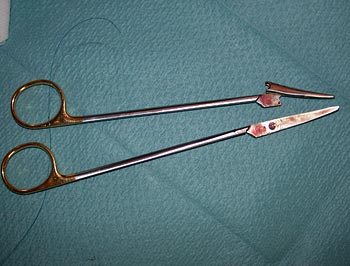 © Seelenlos 2006
Besides, surgery went smooth again, despite this time removing two lumpies at once, plus me bleeding too much as per usual. Also the anaesthesist did a nice job too, keeping me conscious all the time. As for the carousel when she started pouring in the good mix via the drip, guess I'm getting used to it by now, since I perceived it as less intense every time. Pulserate as low as it gets during the whole show. And since they reckoned as during all the previous sessions local anaestesia plus the drowsy mixture would do no sweat, even was allowed eating some before turning up for a change. Which came in even handier since this time had the appointment at 4 pm.

Like always my scalp offered plenty resistance right from the start when he began injecting the local anaesthetic, producing this kinda ripping sound each time the needle eventually went through. Not to mention the even more explicit sound effects as he went gnawing through the skin with the other tools, wrenching, tearing, shredding, snapping. Pity can't have a go actually seeing what he's doing.

So was just enjoying the soundtrack, when suddenly there was a most unusual cracking sound, followed by metal pieces clanging on the floor. Next thing he's causually informing me I finally really wrecked his scissors on the spot, then going on with a replacement, scraping all the nasty stuff out, tailoring the remaining skin and sewing the different layers up.

Still can't wait having all them photos on my screen. Also am curious how the resulting scars and stuff will look like. Though reckon will be able having a first peek tomorrow when going for a check plus to change the bandages.

Again put in two small drains made of surgical gloves, so hopefully no more headaches. Seem to work swell, cause despite the huge load of gauze he put on top before fixing it with surgical tape, blood and juices already seeping out. Am glad still having some of the plastic coated paper sheet left for my pillow, same stuff they use for covering the surgical table and of which the assistant cut me some off the roll earlier. Still, new dressings tomorrow won't harm, and washing wy wool cap either.

Till then, guess I'll just be glad not having to endure the daily disinfection routine anymore. Plus of course hoping there won't be no more friggin complications, knock on wood. Don't want to miss another flight, and am scheduled to attend the annual UFFC rally to Downing St. No. 10 end of next week, plus doing another show @ LARC, both I'm quite looking forward to.

Again the surgeon stressed he was very pleased with how the lumpies had been taken care of, reassuring me there shouldn't be any more trouble with the infection that kept bugging me for about 1 1/2 months now, though I'm to stay on antibiotics for about one more week.

So, what exactly are those things medically? What is the diagnosis, if there is one?

it's a benign tumor stemming from hair root cells. the diagnosis according to the lab report was 'trichilemmal cyst', though in the u.s. 'proliferating pilar tumor (PPT)' seems to be the more common name.

Interesting, because the hair follicle is one region on the adult body with stem cells.