Ok, actually the 3rd day in Prague now, though the last nonetheless. Sh*t, already rushing to Erfurt on the highway once more after all this time, reading again all the familiar roadsigns, combined with the familiar adenaline rush (bloody late but still might just gonna make it if we only set up the very second we'll arrive), what a flashback of wild days gone (ahem, sort of ;-)!

Same as for passing Dresden then heading into Czech Rep, passing the chemical works at Usti n. L. (unhealthy as ever, still can smell it from miles), finally diving down into Praha -- all those crazy memories coming back. Though the main objective of course being quite different this time, and also no way of hitting the road beyond, no matter how tempting all the names on the signs might read, boo-hoo. Not even for the exhib about Czech Decadence Culture we just missed here but which is now shown in Brno, no sir. Which would've been such a good excuse for cause actually it's firmly tied to our current mission, which of course can be outlined by the by now perhaps vaguely familiar two words 'Paul Leppin'.

(And yes, all on the same road to Olomouc, Ostrava, Cesky Tesin -- see pic here [Warning: GERMAN SOUNDBITES NOT SAFE FOR WORK] --, plus hey, since that's already at the border to Poland, why not all the way to Suwalki!)

Talkin bout Leppin, yeah, the two books overdue since quite a while (not to mention the forthcoming additional 4 volumes of the collected works edition) still didn't finish by themselves, and unfortunately Prof. Hoffmann didn't kill us right on the spot as he should have when visiting him two weeks earlier at the beginning of his summer semester stint in Freiburg i. Br., so now we'll have to complete them ourselves while he's still in Europe m'afraid.

To be more precisely he's right here in Prague at the mo, same as a lots of other people originally from the US, UK and Austria also involved with him directly or else in various Leppin-related projects. So when we got these two gigs not too far from Prague which paid for most of the trip anyway, became clear rather quickly we'll just miss half of the start of the semester as usual.

So now we linked up with Hoffmann again (plus also with swiss ex-pat artist Mark Divo who offered us to stay at his appt) and also got to know a load of other nice folks into the bargain. Bet we'll be back here sooner than we thought.

(Which reminds me, last time I was there, also didn't see more of it than driving in and out, plus the main station while picking somebody up on the way in, plus the inside of the club we played, and that was that. Already pissed me off then, but still loved it anyway.) 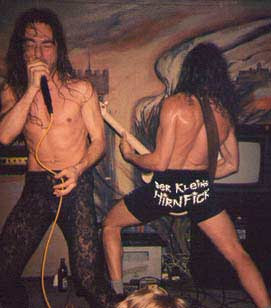 DKHF live in Cesky Tesin
Posted by Matt at 1:15 am